Scrollkeeper are a Traditional Heavy Metal band from Houston, Texas that specialize in high energy, anthemic original material that is reminiscent of Metal's halcyon days. The band is comprised of: Simon Marfleet on drums (Coffin Grinder, Calculus), AlexanderK on guitar (Descent Into Madness, Final Xit), Justin McKittrick on vocals (Saxon King, What Lies Beneath) and Andrew Sutton (Mercenary X, Descent Into Madness) on bass.

Scrollkeeper are a Traditional Heavy Metal band from Houston, Texas that specializes in high energy, anthemic original material that is reminiscent of Metal's halcyon days.

After a revolving door of guitarists, Simon Marfleet (drums) and Justin McKittrick (vocals) asked Alexander K. to join on guitar in November of 2016. Soon after William Sullivan (bass) and John Morris (guitar) joined the band.

Out of these rehearsals eventually emerged the bulk of songs on the band's current set list.

During rehearsals for their debut show, Scrollkeeper recorded a 2 song EP titled “Fortune Favors the Bold”  which was tracked live in their Downtown Houston rehearsal studio and mixed and mastered at Nocturnal Sound Studios (Houston, TX).

The band’s debut show was as support act for Delain and Hammerfall in June 2017. Since then, Scrollkeeper has shared the stage with Manilla Road, Dirkschneider, Angra, Cloven Hoof and kept a busy show schedule.

The song “Surrender” was selected for the “Doomed and Stoned in Texas” compilation, featuring doom legends Solitude Aeturnus, deadhorse and other Texas stoner/doom bands with proceeds going towards hurricane relief.

Started playing air guitar in 1982 after getting a fifth generation cassette copy of Kiss "Alive!".
Quickly graduated to more "legit" metal bands, AC/DC, Accept, Twisted Sister and W.A.S.P. thanks to my older cousins and tape trading with classmates. Somewhere around 1984 I started pestering my parents for an electric guitar, they eventually relented and to my dismay bought me an acoustic.
After hearing the horrendous racket from a "cover" of Slayer's "Black Magic" on an out of tune acoustic guitar, my dad, an accomplished accordion player, decided that "it was long overdue to get the kid some lessons". That resulted in me getting signed up to study guitar, music theory and composition with a well known National Opera French horn/guitar/mandolin player, Ivan Maslev. He provided an interesting curriculum and concentrated heavily on theory, which is what I wanted to pursue as I was interested in songwriting.

At about that same time I met some like-minded kids and we dabbled in punk, then we formed the Hellhammer-inspired Barbarian, which eventually transformed into prog thrash outfit Dissident. Dissident had surprisingly quick success on the hungry for metal local Bulgarian scene, culminating with sold out festival Metal Fest at the Circus (1989). Due to economic and other circumstances I moved to the US and have been residing in Houston, TX since the early 90s. I've been in numerous bands/projects since, most notably founding and running prog. thrash band Descent Into Madness for over 13 years, starting in 2001. Around that time I also got on the other side of the glass as a recording engineer and still do occasional freelance recording/production as time permits.

Equipment: I am not particularly locked in on anything, at the moment I like to torture Mesa Boogie amps, LTD guitars on stage. My all time favorite axe is a Music Man Steve Morse. Currently endorsing Gravity Picks and Italia leather straps.

I was introduced to the amazing world of drumming at the grand age of 17 while living in England. My first ever performance was at a blues jam at my high school. My main influences at that time were The Cult, Billy Idol, Van Halen, and AC/DC just to name a few. I fully embraced Metal in 1990 jamming to Slayer, Pantera, Metallica, and Anthrax.

When I moved back to the States I hooked up with a band call Wickerman Zoid from Houston, TX which I quickly got fired from due to my terrible inability to play double bass. Ha! Since then the bands I have played in are Antisocial from New Orleans LA, Yaldabaoth, Coffin Grinder, Natas, Calculus, all from Houston TX, AD/HD, Dethlahem, L.A. Slumlords, Mercenary Angel all from Los Angeles CA and now Scrollkeeper back in Houston, TX.

I’m the rare individual who actually grew up in a household that was metal friendly. My father introduced me to all the classic heavy metal artists that I love today: Judas Priest, Iron Maiden, Dio, etc. and to the emerging thrash bands of the time. My mom was into hair bands (that may have rubbed off a bit too). I began singing in local Houston bands while in high school. Most of the early bands that I was involved with during that time and up through my 20’s were of the thrash and death metal variety: Insidious, Nuclear Funeral, Obliquity, What Lies Beneath, etc. Though I enjoyed the intensity and aggression of the extreme metal scene, I began to feel constrained artistically by the vocal style within the genre. Thus, in 2008 I founded Saxon King as an outlet for my more melodic and experimental musical ambitions. That spirit of creative growth as an artist remains with me today as I wield the mic for Scrollkeeper. 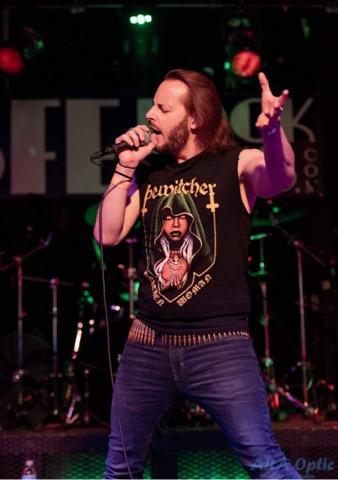 I began playing string instruments in 5th grade joining orchestra and choosing the cello after being told the bass was too big and cumbersome.  I briefly in 8th grade switched to bass, then made the switch permanent in high school.  Within two weeks of making the switch, I also bought a bass guitar and joined my first band.

Senior year, I played my first “show” which one was song for the choir talent show.  In that time, I was listening to and learning songs from Anthrax, Primus, Red Hot Chili Peppers and others but never jamming with anyone else on them.

Moving on to college, I was on a full music scholarship for Double Bass.  The second semester, I was “highly encouraged” to join the jazz band and that was when my bass guitar playing really came alive.

I also joined my first real band, called Black Lily.  That band stayed a fixture in my life for 5 years.  There was a brief hard rock cover band as well called Legacy.

My interests in Metal weren’t all that strong then, but that changed when a friend played a band called Therion.  This lead to many other bands outside of symphonic metal.  It was during this phase that I ended up offering to play upright bass for Deanna Haughey’s solo music.  She invited me to jam with Descent into Madness where I met Alex.

Since then, I’ve played in a punk band (BS Factor), Surf Rock band (Dark Surf) and was the founding bass player for Mercenary X that later became JudasX.  On top of that, I still play classical and jazz gigs on both upright bass and bass guitar and see so many parallels between both styles and the progression of metal from its founding.